Very First Ever IzzyElfBlog by Tizzy 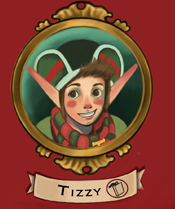 Hi!  My name is Tizzy.  I am one of Santa’s Izzy Elves, and I had a really scary thing happen to me one recent Christmas morning.  I was packed by mistake in a present and was delivered to a home by Santa Claus (we elves call him S.C.) with the rest of the gifts.  I was just starting to panic, when the two little boys who lived there, Owen and Alex, did something really, really NAUGHTY. They sneaked downstairs and opened their biggest present BEFORE THEIR PARENTS WERE UP.  And there I was!

I explained to them that S.C. always says that children’s imaginations are powerful. In fact, his sleigh runs on this power! So I figured that Alex and Owen might use their own imaginations to get me back to the North Pole 1) before I missed the Big Elf Celebration and 2) before their parents came downstairs.  Well, it took awhile, but they finally figured out how to do it.  I won’t tell you exactly what happened, but my story definitely has had a happy ending!

I told Dorothea Jensen (we elves call her Deedy) all about this, and she wrote it down for me in a story called Tizzy, the Christmas Shelf Elf.  At first, it didn’t have any pictures in it, but recently I have been posing for some with my illustrator, Michelle Alfonso.  It’s hard to hold still while she draws me, but she doesn’t seem to mind if I move my mouth, so we have fun chatting about this and that as she works. I asked Michelle if I could post some of her sketches for children to see, and she says that is okay with her. So I will be putting the occasional sketch on our Pinterest site so you can preview the illustrations that will be officially in the story soon.  (Yes, we Izzy elves will have our own Twitter and Pinterest accounts soon! We’re very up to date.)

In case you are wondering why we are called the Izzy Elves, it’s really, really simple.  S.C. gave each of the eight elves in my section names that end in, yes, "-izzy".  I tell Alex and Owen all about them in my story like this:

There’s Whizzy, who rushes around, always scurries
He probably packed me, in one of his flurries.
Now, Fizzy and Dizzy - they both specialize
In holiday treats and in toys that surprise:
Hand buzzers and squirt guns and magical rings,
Jacks in the boxes and those sorts of things.
And Bizzy, of course, is S. C.’s right hand man
He bosses the others whenever he can.
The puzzles are Quizzy’s particular trick
She turns them out cleverly, my, she is quick!
Our Frizzy’s the resident expert up there
At cutting and curling the Christmas dolls’ hair.
While Blizzy’s the last (she’s my favorite lass)
She fashions the snowflakes that swirl under glass.”
© 1999/2013 by Dorothea Jensen

By the way, Blizzy says she has already told her story to Deedy so she can write it down.  It is called Blizzy, the Worrywart Elf,  and explains how she figured out where I was on that Christmas morning when I ended up at Alex and Owen’s house.  She is very, very clever. That’s one of the reasons she is my favorite lass.  Unfortunately, there is one little bit in Blizzy’s story that I find rather embarrassing, but Blizzy says that’s her favorite part!

If you want to find out more about my story, or Blizzy’s story, or our friend, Deedy, go look on her website: dorotheajensen.com
Posted by Dorothea Jensen at 10:16:00 AM No comments: