We wondered where she was all week. 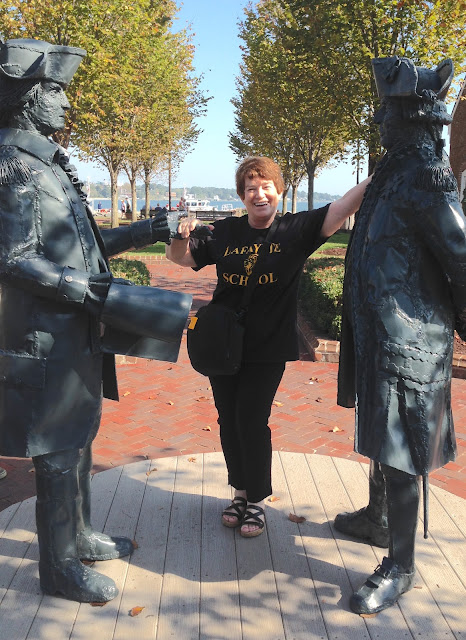 Another post from Deedy (Dorothea Jensen). Do you suppose there will ever be statues of US anywhere? Love, the Izzies.

Here I am in Yorktown, Virginia recently, visiting the statues of Washington and de Grasse, commander of the French fleet that bottled up the Brits at Yorktown. (I was there for the celebration of the Brisith surrender on October 19, 1781.)

I am standing in the exact spot where the new statue of Lafayette will be placed, exactly one year from now. (His pose will be a little different, as I doubt he'll be holding Washington's hand, etc.)

Here is more information about Lafayette's statue and how you can help make this a reality!

* * *
In historic Yorktown, Virginia, site of the final major battle of the Revolution, there is a duet of statues honoring General George Washington, commander of the combined American and French forces, and French Admiral François De Grasse, commander of the French fleet that "bottled up" the British troops under General Cornwallis at Yorktown. These life-sized figures were created by Virginia sculptor Cyd Player.

Installed in 2005 and enjoyed by tens of thousands of visitors annually, the statues commemorate two important meetings that took place on board De Grasse’s flagship the Ville de Paris to plan the 1781 Yorktown campaign and to explore plans for further operations.

The problem? It was supposed to be a quartet of sculptures. There are two important figures missing! Also present for at least one of these meetings were General Rochambeau, who led the French troops, and General Lafayette, who had kept Cornwallis trapped at Yorktown until the combined American and French troops had arrived. (He also served as an interpreter at the meeting with Washington, Rochambeau, and De Grasse.)

The reason that Lafayette and Rochambeau are not represented here? There was not enough funding to create all four statues at the same time.

Now the national organization dedicated to honoring the young Frenchman who did so much to help us gain our independence, the American Friends of Lafayette, is teaming up with the Celebrate Yorktown Committee of the Yorktown Foundation, and other interested organizations and people, in order to commission a statue of Lafayette. The new statue will accurately portray this important historical event and provide an opportunity for visitors of all ages to discover and recognize the role Lafayette played in shaping America’s history.

The goal is to get the statue finished in time to be dedicated on in October,  2017, at the annual celebration of the American victory at Yorktown.

Please consider contributing to this exciting endeavor and helping to construct history!

To help make the Lafayette Statue a reality, click here to donate via PayPal or mail a check (made out to American Friends of Lafayette) to:

The AFL is a 501(c)(3) non-profit organization and contributions are eligible to be tax-deductible.

P.S.  Finally, you might want to become a member of the American Friends of Lafayette.
The cost to join is minimal, and it is great fun to get together every year to learn more about General Lafayette and other figures and events of the American Revolution. There is also a great publication, "The AFL Gazette", with information about Lafayette sent out to all members several times a year.
Posted by Dorothea Jensen at 7:52:00 AM No comments:

An Actual Salute to Amazon in One of our Stories!

So as we mentioned in previous posts, if it weren't for Amazon, we'd all just be a gleam in Deedy's eye! (That would be the eye of Dorothea Jensen, FYI.) Once she found out that she could publish books on Amazon via CreateSpace and KDP, she started scribbling down our stories like CRAZY,  and every single one of them has won honors/awards!

We also wrote a post about the time we freaked out because our books were shown as OUT OF STOCK at Amazon just a week or two before CHRISTMAS. As you might recall, we e-mailed Jeff Bezos about this and threatened to rat him out to Santa, personally. Jeff fixed that problem ASAP. (Even Jeff Bezos doesn't want coal in his Christmas stocking, apparently.)

In order to pay tribute to Amazon's role in our stories coming into being, we consulted with Deedy and decided she could put something in the latest one (Frizzy, the S.A.D. Elf) that had a direct reference (slightly disguised) to Amazon's wishlists. Here's what she wrote for us:

For S.C. has learned there are wishlists galore
Where children can add the new toys they adore,
With multiple websites where each kid can post
A list of the gifts he or she wants the most.
Now Santa is eager to try this e-tool
To know in advance just what items are cool,
To help him make certain, upon Christmas Eve,
He has the right toys when he’s ready to leave.
So he wants to e-show off all toys that are new
And find out who adds them to which wishing queue.
He does still read letters that make their way here,
But wishlists are added to all through the year.
They’ll give The Big Picture to guide Elf Construction
And help Santa Claus to plan out toy production.
- Bizzy, the S.A.D. Elf  © 2014 by Dorothea Jensen

So there you have it, our Izzy Elf Salute to Amazon.

Thanks again for letting Deedy share our stories with the world!