A Happy Surprise for Deedy (Sigh) 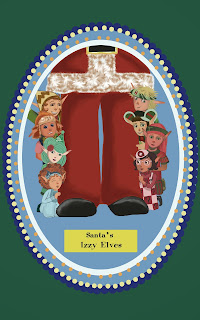 Deedy (Dorothea Jensen to you) had some good news which we Izzies are willing to share with you all.

Of course, we wish she was getting happy news about our books, but oh, well.

Once in awhile I Google A Buss from Lafayette just to see if there are any new reviews hiding out in electronic nooks and cranies that I don't know about.

Look what I found online this morning! 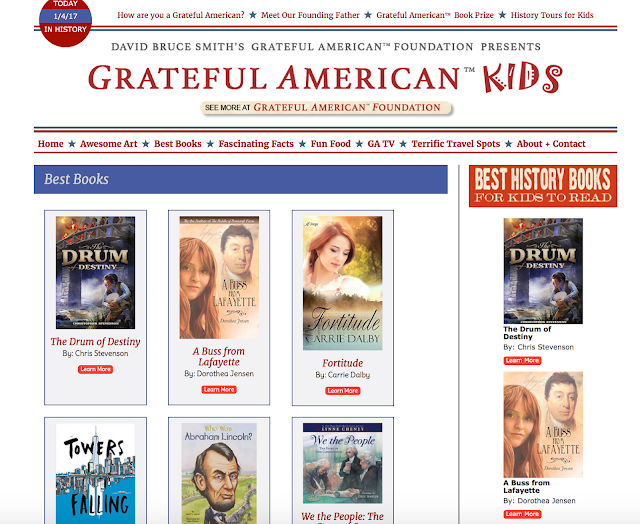 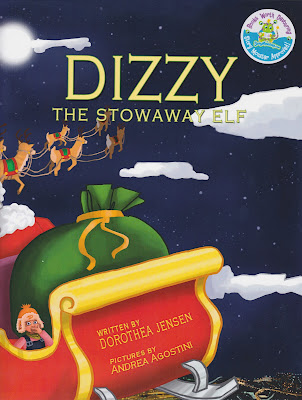 As some of you may know, a couple of Deedy's (that's Dorothea Jensen to you) books about us Izzy Elves featured her grandsons.

In Dizzy, the Stowaway Elf, Stuart and Drake play major roles in the story.

When Deedy stayed overnight at their house on Christmas Eve, she could NOT resist "re-enacting" the first picture in the poem about Dizzy's big adventure. 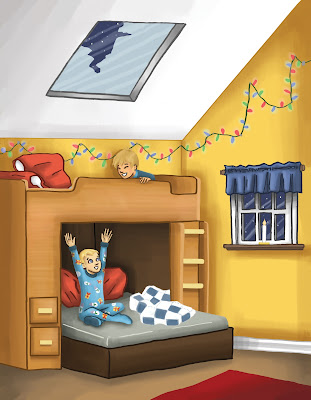 Here is the illustration, created by Andrea Agostini.

Below is the "re-enactment" staged by Deedy, with the help of Stuart (top bunk) and Drake (bottom bunk). 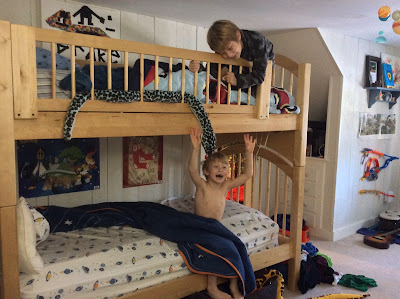 And here is a close up of Stuart from another shot: 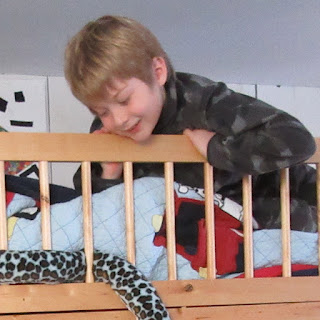 And here is the verse that goes with both of these pictures:

‘Twas the night before Christmas,  about half-way through.
(The clocks in the house showed the time to be two.)
The parents were nestled in slumber so deep,
But Stuart and Drakey could not get to sleep.
They’d done all the time-honored things, Christmas Eve
Before both their parents were ready to leave
The boys in their bunk beds to sleep through the night.
Yes,  each of the kids had done everything right.
Of the Christmas routine, not a thing did they lack:
They’d hung up their stockings, set out Santa’s snack,
They’d sung all the carols, donned Christmas PJ’s
And brushed all their teeth in the usual ways.
They’d been bedtime-storied,  been tucked in and kissed:
Not one of the Christmas Eve things had been missed!
They’d even removed all electronic toys
Concealed under blankets, like good little boys.
So why in the world did young Stuart and Drake
Lie up in their room open-eyed, wide awake?
We need not look far for the probable cause:
They were filled with excitement about Santa Claus!
And they had Big Plans, did those two little imps
They hoped that of Santa they might catch a glimpse.
But they would have revved up a few notches more
If they’d known what had happened a few hours before.